I should take more pictures

So it's a lazy Saturday here in Bologna, and I'm sitting in my bed thinking about the change of seasons. Not so long ago it was full fledged summer here in Italy. This is what the best days looked like: 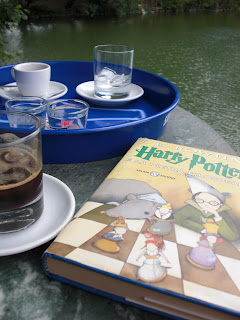 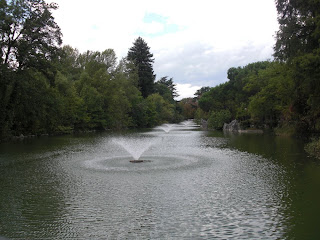 That's Bologna's biggest and snazziest park- the Giardini Margherita. There's a little caffe on an island in the center of the pond. It's got a covered terrace overlooking the water, which is filled with turtles, tiny fish, and very big fish that mill around waiting for the bits of bread that kids throw down from the bridge. The park is full to the brim with couples, like most other places in Italy, but it's also got families, high schoolers, people on rollerblades, and circles of hippies playing guitar and passing around suspicious looking cigarettes. I spent some really nice afternoons there when the weather was warm, sitting in the grass with my friend Marina and reading Harry Potter in Italian.

Then, seemingly overnight, the seasons changed, and it was autumn. Suddenly, I had to dress like this to venture out of doors: 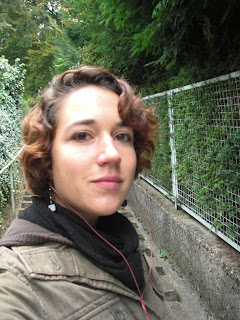 Thankfully, my hair is so long these days it keeps my ears warm, and my Berkeley collection of scarves is serving me well. And of course, with the arrival of autumn, have come my first university classes. Predictably, the Italian university system is disorganized and confusing. Classes don't start all on the same day, but rather vary depending on Facolta (think Letters and Sciences) and Dipartimento (Art History). Also, since high school here in Italy is 5 years instead of 4, their BA program (prima laurea) is only 3 years. After that, there's two years of "grad school" for a laurea specialistica. Because we're here through UC, we can take both undergrad and graduate level courses, which are usually much smaller and involve a more American interaction with the professor- discussion rather than straight lecture. The only class I've had so far has been "Archeologia e Storia dell'arte Cristiana e Medievale" - Christian and medieval archeology and art history. It's really interesting, and I'm shocked to learn that I can actually follow a graduate level course entirely in Italian. In fact, the problem I'm facing isn't language comprehension, but rather my complete lack of background in Christianity. Who knew there were so many saints! And what on earth is the difference between a Cathedral and a normal Church??

Another shift that's come with the cooler days and cold late nights is this new and wonderful appreciation of where I am and what I'm doing. Sometimes walking down the street I'm suddenly struck by the realization that this is real- I am young and living in Italy and my life is unfolding in front of me to be molded into whatever shape I please. The whole city seems to be filled up by possibility, tucked into every alley and fountain and stretching indefinitley out into the too-blue sky. Maybe it's a euphoria that won't last, but one day I woke up and I wasn't lonely any more. Something clicked, and it was enough to just be myself, here, and at this moment. And it's still true that I have no idea what I'm doing, and I still spend too much time thinking about the past and wondering about the future, but it's October now, and I finally know that I am exactly where I am supposed to be. 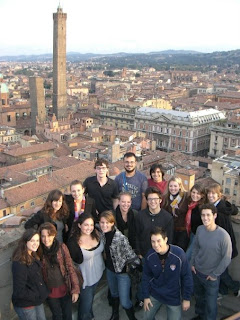